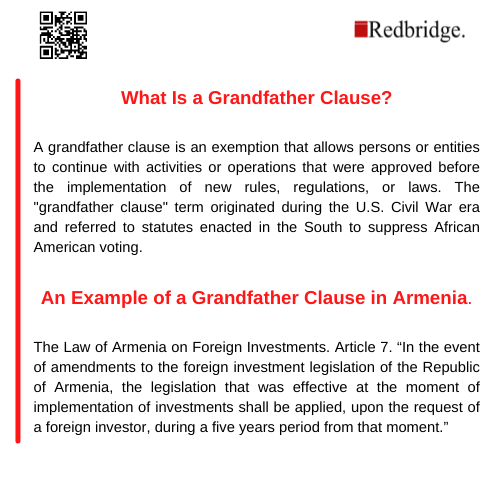 What Is a Grandfather Clause?


An Example of a Grandfather Clause in Armenia. 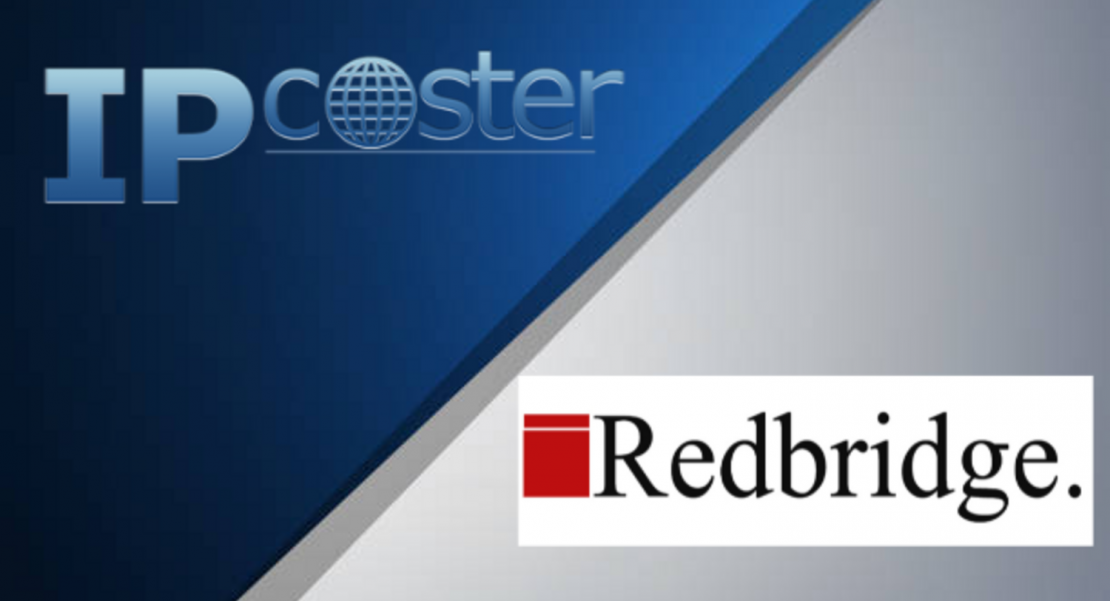 Redbridge is a member of IP-Coster Platform 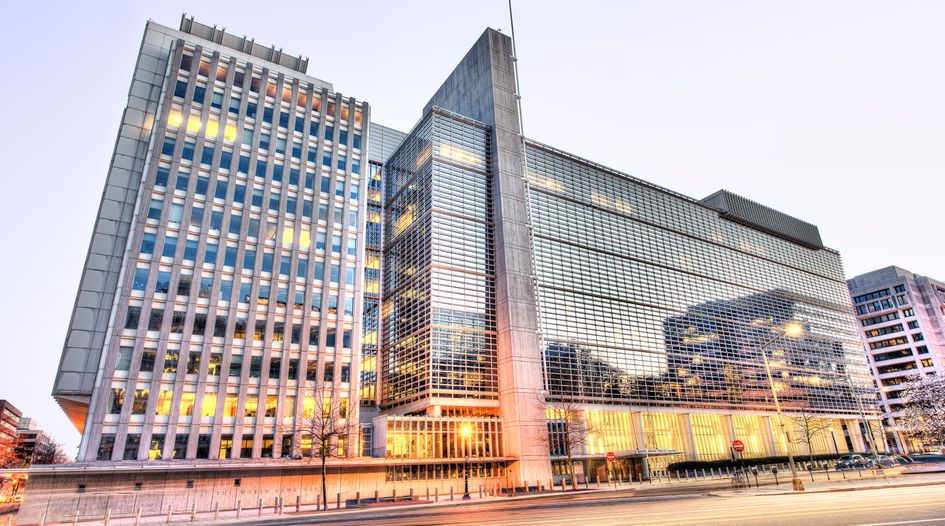 On April 13, 2022, the Secretary-General of ICSID registered an application for partial annulment of the award filed by Mr. Edmond Khudyan (Claimant) and notifies the parties of the provisional stay of enforcement of the award in ICSID Case.

According to the Claimant, there is no legal source that affirmatively supports the notion that Mr. Khudyan ever became a citizen of the Republic of Armenia. The Tribunal derived its sole support for that premise from its own inaccurate paraphrasing of Article 15 of Soviet Law on the Procedure of Exiting the USSR, the effect of which would be to make every person who had ever lived in the Armenian SSR and emigrated abroad automatically a citizen of the Republic of Armenia in contradiction to the express terms of Republic’s own Citizenship Law. The Tribunal’s decision that it does not have jurisdiction over Mr. Khudyan because he is a citizen of the Republic of Armenia is not tenable, its flaws are clear on the face of the Award, and it does not stand up to even minor scrutiny when compared with the relevant legal sources that were brought to the Tribunal’s attention. It therefore constitutes a manifest excess of powers under Article 52(1)(b) of the Convention.

Therefore, Mr. Khudyan respectfully requests pursuant to the ICSID Convention the Award rendered on 15 December 2021 in ICSID Case No. ARB/17/36 be annulled.

This case concerns a dispute filed with the International Centre for Settlement of Investment Disputes ("ICSID") pursuant to Armenia - USA BIT.

The Claimants are Mr. Edmond Khudyan, a national of the United States of America ("US"), and Arin Capital & Investment Corp., a corporation established under the laws of the State of California in the US (collectively, the "Claimants").

The Claimants are represented in these proceedings by Dr. Gevorg Tumanov of Redbridge and Mr. James H. Boykin, and Mr. Alexander Bedrosyan of Hughes Hubbard & Reed.

The Armenian government has introduced new incentives for IT companies. Legal entities and individual entrepreneurs that will employ more than 50 employees previously not employed in Armenia will receive 50% reimbursement of the income tax paid.

The initiative intends to develop IT, as well as the creation of a suitable competitive environment in Armenia.

It aims to encourage the recruitment of highly qualified employees. The idea was to draw a significant number of freelancers out of the shadows.

State support is provided to commercial organizations and individual entrepreneurs, which meet the following conditions: 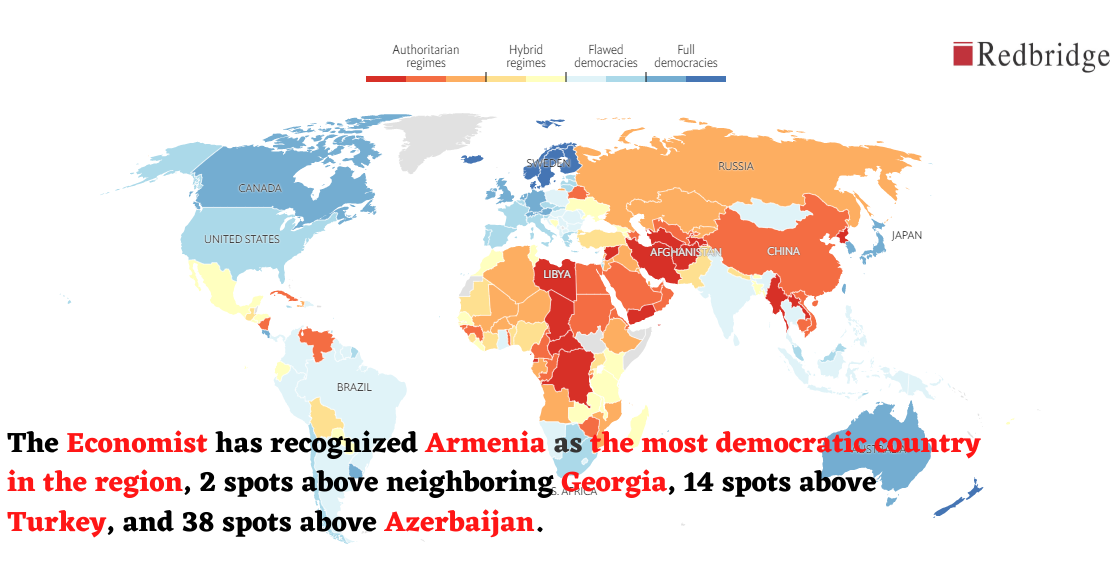 The Economist has recognized Armenia, as the most democratic country in the region, 2 spots above neighboring Georgia, 14 spots above Turkey, and 38 spots above Azerbaijan. See: Democracy Index 2021

Tax Incentives for IT Startups in Armenia

Armenia has made the IT sector a priority industry since the year 2000. Several initiatives have been adopted over the years to encourage the development of the IT industry, such as tax incentives for IT startups.

The system of granting tax incentives to IT startups first came into force in 2015 based on the law "On State Assistance to the Information Technology Sector". It is designed to provide IT startups with tax breaks for the first years of their activity. Low rates set under the law are intended to provide motivated behavior for investment and reduce the risk of tax evasion.

In April 2019, the Armenian parliament adopted a set of amendments and additions to the law "On State Assistance to the Information Technology Sector", which extends the term of the above-mentioned tax breaks. As a result, the deadline for applying for and obtaining a certificate for tax breaks has been extended to 1 December 2022.

IT startups operating in the following fields can benefit from state support:

Tax break certificates are granted on a case-by-case basis by the Special Commission established by the Government.

The tax breaks granted to Armenia-based IT startups exempt them from paying corporate tax of 20% (a zero rate applies under this Law), as well as providing a reduced income tax flat rate of 10% (instead of generally 20-21%) for employees.

Companies applying for a certificate must meet certain requirements, particularly:


Armenia is a welcoming country, and among the mentioned, there are multiple reasons to choose Armenia as a business location.

International Sanctions on Russia and its impact on Armenia

Many countries have imposed a slew of financial restrictions, including freezing the assets of Russia's Central Bank, limiting its ability to access its dollar reserves. The US, EU, UK, Canada and Australia have also banned people and businesses from dealing with Russia's Central Bank, Finance Ministry and the Wealth Fund.

Russian Banks Otkritie, Bank Rossiya, Novikombank, Promsvyazbank, Sovcombank, VEB and VTB have been already removed from the Swift messaging system, which enables the transfer of money across borders. However, the ban stopped short of including those banks handling energy payments. Credit cards issued by Russian banks using the Visa and Mastercard payment systems have stopped functioning overseas after March 9.


Russia has officially become the most sanctioned country in the world. Could it have drastic repercussions for business and what should be noted?

In recent years, Russia has accelerated using its own payment cards, like MIR, and its own version of Swift, SPFS․ MIR system was introduced in Kazakhstan, Kyrgyzstan and Armenia in 2018, and in 2019 in Turkey, and Uzbekistan. In October 2021, MIR was launched in the UAE, Bulgaria and Thailand.

The Ministry of Economy of Armenia has published a guide for Russian, Belarusian and Ukrainian businesses seeking to move to Armenia, suggesting how to register a business, renting an apartment, even how to bring pets across the border. It also has created a working group to answer queries from businesses interested in moving.

The concept of parallel importation is a constantly growing phenomenon in the current globalized world. Parallel importation refers to a situation where the owner of the trademark has not given its consent to import its goods to a certain area.

There are at least three concepts existing in the global practice:

Armenia, as a rule, adheres to the international principle of exhaustion of trademark rights with some exceptions. It should also be noted that Armenia is a member of the EAEU (Eurasian Economic Union) consequently, the regional concept regulations of the EAEU shall prevail over domestic regulations in relations with the member states of the Union․

The concepts of trademark exhaustion and parallel imports are rather debatable, and a unanimous approach to these concepts is not as obvious. The presumption that parallel import is beneficial for consumers for the reasons of offering cheaper prices and greater selection is a strong argument, although there are both supporting and opposing arguments whether the unauthorized parallel imports are truly beneficial for the market as a whole. Consumers would be more than happy to freely access parallel imports without any restrictions, and worldwide international trademark exhaustion would support this kind of approach. However, the rights of the consumers are not the only rights to be protected, and the rights of the trademark’s owner should be protected as well.

Brand owners may not totally avoid parallel import, but they are strongly encouraged to develop and implement a coherent strategy to redress the problems created by them. Aside from trademark law, they can also look into other areas of law to build up their brand protection plan.